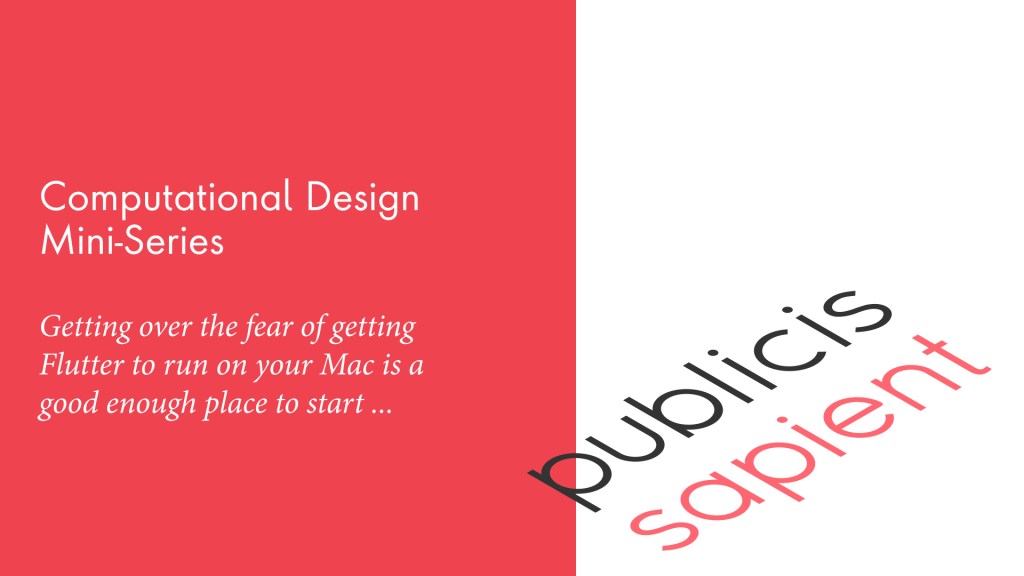 Gentle Primer For Setting Up Flutter on OS X

Why is computational design important? It lets you proceduralize and automate what can be a tedious task to repeat over and over — and it doesn't mean you have to code. If you can think computationally, that's where you want to start. You need to know how to speak machine at least a little, or as I like to say "un poco," to get a feel for what the 4th industrial revolution is all about.

In the event you want to feel "the rush" of being fluent in code without writing any code I recommend getting started with Flutter because it's a bit ... weird. It lets you deploy the same code to native instances of iOS, Android, and the Web — all with the same sorcery skills. As an unabashed fan of Flutter — as I recently shared in Fast Company as one of the most important design ideas of the decade — I was tickled to see the Flutter team respond to my opinion.

So I thought it would be helpful to have a step by step guide for how to get started with Flutter on OS X in case it seems a bit frightening. Frankly, it is a bit daunting to get going, so here's a guide for how to see what I've started to see in Flutter from the safety of your own computer. Note that I'm still running Mojave instead of Catalina. For a note on Catalina scroll down to the bottom of this post ...

To get started you'll need to have at least 15 Gb available on your computer to get going. The following will take you about 15 to 30 minutes to download on a fast connection.

The first three installs happen the normal way. Either they are automatically set up for you, or you need to manually drag them into your Applications folder. The last one, installing Flutter, requires you to access the command line via a Terminal application. Follow the instructions here and you will be fine. I'll walk you through what I did here via a fresh install at the end of 2019 (note that month to month install processes change so always check out the source documentation.

After you input flutter doctor it will tell you if you have what's needed. In my case it's telling me to configure Android Studio, Xcode, VS Code with step by step instructions for what to do.

If you've gotten this far then CONGRATULATIONS! You should get the following when you type "flutter doctor":

Get Both An Android Simulator And iOS Simulator Running

You'll next need to set up a few devices that Flutter can connect to. Go here to see how to configure a fake Android device to run on your Mac.

First, configure your Android Virtual Device (AVD) manager for graphics acceleration. Then click on "+ Create Virtual Device" and select your favorite device. I have a Pixel 3 XL so that's my go-to device. It asks for a system image so I just select the latest one — which results in a 1.1 Gb download! Keep pressing forward with making the virtual device.

And there it is!

If you then run flutter doctor you will see that you now have 1 connected device available! That gives you an Android device to start. If you'd like to see an iOS device, that's a lot easier.

Just run "Simulator" (hit command-space to find it) and you'll be booting up an iPhone running on your Mac desktop.

Now when you run "flutter doctor" you can see it found two devices:

And if you run "flutter devices" you'll see the more precise descriptions appear. Note that you can change the model of the iOS device to a less fancy one from the menu bar. It's way easier to do this than for the Android emulator.

Feels good? I know! Take a break before we go forward. Because the next step is going to feel a-ma-zing!

Now keep following the instructions over here and you need to now make and run your first flutter app.

I have both my devices running (iOS and Android) and so what I get is:

Note that I can target a specific device by typing in its name or I can run it on both, which results in the following beautiful moment.

Hit 'd' to detach from the emulators. If you want to target just one device you do the following (put the name of the device in double quotes):

Flutter does what's called "hot reload" which is really cool once you get started with it. But if you see the above outcomes then you are ready to take a break and consider how you have made all the magical incantations necessary to develop native mobile apps on all major platforms out there. Enjoy the feeling! —JM

If you're using Catalina, the one thing you want to note in my instructions is to be careful for how you set your $PATH. The default shell in Catalina is zsh which means you need to edit your .zshrc file. Thanks to Travis Boatright for adding this extra tip for Catalinans out there!